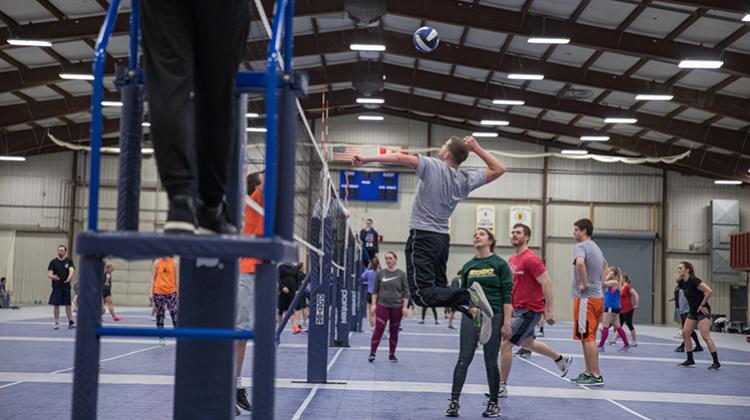 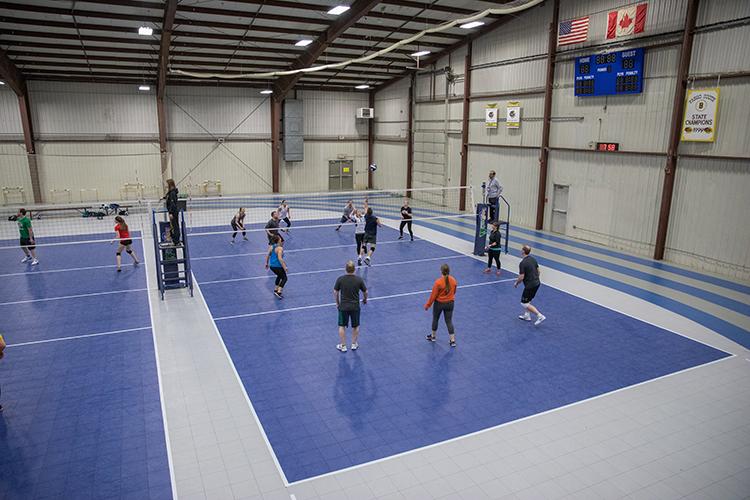 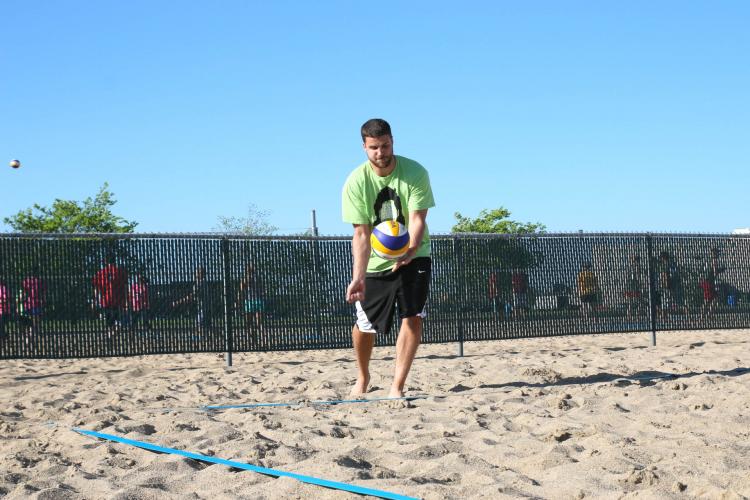 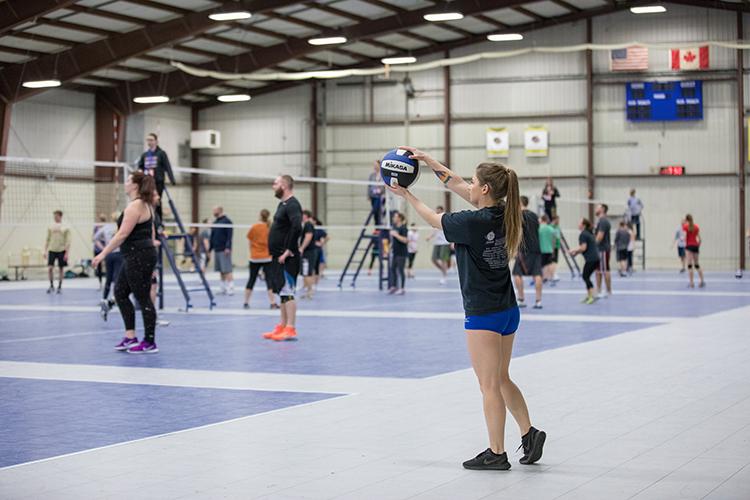 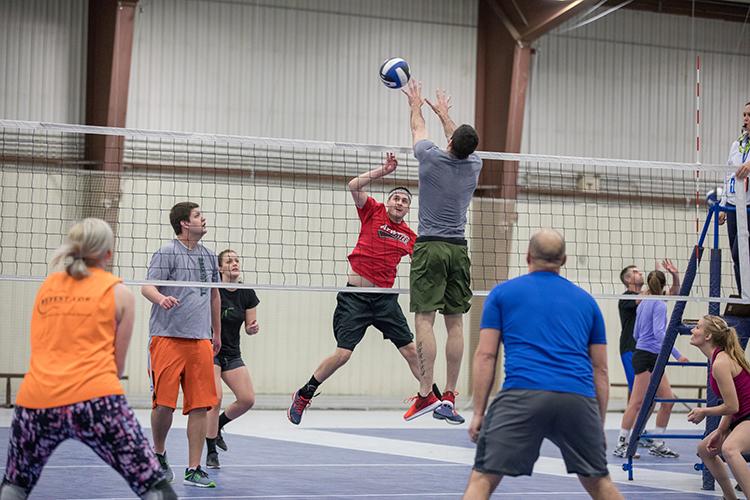 This league takes place between August-October. All teams will play 14 matches of league play, plus tournament participation. A match consists of three games up to 20 points using the rally point system. All leagues are 6-player leagues and players cannot play on more than one league/team per night.

This league takes place between November-February. All teams will play 14 matches of league play, plus tournament participation. A match consists of three games up to 20 points using the rally point system. All leagues are 6-player leagues and players cannot play on more than one league/team per night.

Note: Leagues are scheduled pending availability of gyms and days teams are available to play.

This league takes place between March-May. All teams will play 14 matches of league play, plus tournament participation. A match consists of three games up to 20 points using the rally point system. All leagues are 6-player leagues and players cannot play on more than one league/team per night.

Sand volleyball leagues will play eight or nine weeks between May-August, plus tournament participation. The leagues will play outdoors on sand courts. The games will be informal without officiating. Players cannot play on more than one league/team per night.

1. Rosters must be turned in before your first match. Completed rosters must be turned into referee of your first match. Players may be added to the roster through Sunday, February 14th for Coed Volleyball and Wednesday, February 17th, for Women’s. Fee payments must be made at the Park District Office. Players on completed roster are eligible to play in the End of the Season tournament, provided they played in at least one regular season match. All players in our Adult Volleyball Leagues need to be at least 16 years of age or older. 16- and 17-year old’s will need a parent or guardians signature on the roster

4. A league play match will consist of three games up to 20 points each using the rally point scoring system. A 2-point advantage must be held at the end of each game. However, a 22-point caps per game will be enforced. A time limit of 45 minute per 3 game set will be enforced. The referee will announce the remaining time only at the beginning of the third game. If time expires during the second game, the teams will finish the second game and a 10-point third game will be played; that is the first team to score 10-points with a 1-point advantage wins the game. If time expires during the third game, the referee will tell the teams that time has expired, and the game will end when a (new) 1-point advantage has been reached with a minimum of 10-points scored by the winning team. Each of the games will be counted in the league standings. Tournament play will consist of two out of three games. Scoring for the league tournament will remain the same as the league scoring. No time limit will be used during the Tournament play.

5. Teams will have a 5-minute warm-up if the previous match was 45-minutes or longer and will have 1-minute between each game or as soon as both teams are ready. Time will only stop for an injury or an unusual occurrence. Any delay in a game purposely caused by team members will be called unsportsmanlike conduct and penalized with a side-out or point. There will be two 30 second timeouts per 3 game match, this includes tournament play also. Teams are asked to vacate the court as soon as the last game is finished.

7. No automatic forfeits. A team can play with less than 6 players and more than one. There must always be at least one male and one female on the court in all coed matches. However, there may be more women than men (no limit). NEW RULE: A team can play with one more male than female on the court. (Example: if you only have 2 females and 3 males, your team can play with those 5 but if you have 2 females and 4 males then your team can still only play with 5). There is not a 5-minute grace period to begin a game; all games must start at their scheduled time provided both teams have the minimum number of players. If a team does not have the minimum number of players, the game will be handled as a forfeited game. If a team plays with less than 4 players, there must be a back-row player. Women will not be allowed to play in men’s leagues and men will not be allowed to play in women’s leagues since leagues are offered for men, women, and coed.

8. Players can’t play on two women’s teams. Coed players cannot play on more than 1 coed team per night. However, the different leagues that the player chooses to play on cannot be more than one class higher or lower than each other (example. If a player plays on a Thursday Upper League, he or she cannot play on the Tuesday Lower League without the approval of the Recreation Specialist in charge of the leagues). Players on a coed and or women’s team can only move one level up or down. (Upper/Middle/Lower) Unless approved by the Recreation Manager or Volleyball Coordinator

9. Only the captain of the team will be allowed to question the rulings of a referee. Only non-judgment calls can be discussed. No unsportsmanlike conduct including yelling at the opposite team, swearing, arguing, fighting, and talking back to the referee will be allowed. The referee has the authority to eject a player from a 3-game match. Any additional unsportsmanlike conduct by a player may result in suspension from the league. Any act of aggression towards an official or opposing team will result in immediate suspension of player(s) from the league for a period of one year. If an expelled player or fan does not leave the playing area within two minutes, that game will be forfeited. Only the volleyball coordinator has the authority to eject a player for the rest of the season. This would include all leagues affiliated with the Fargo Park District. When a player has been ejected for a season, he/she will be allowed to come back during the next season, but any unsportsmanlike conduct during the season will result in immediate suspension from that season.

11. Captains, please help us with this rule by letting your team know this rule before they show up to their first match. Any jewelry while playing, such as watches, rings, earrings, and necklaces will not be allowed. No hats can be worn during play.

12. A choice of Serve/Receive or Side will be determined by flip of a coin. For league play the team that wins the coin toss, has the choice for games one and three. The other team will serve or receive for game two. For tournament play a second coin toss will take place if a third game is necessary.

13. The server will have 8 seconds to serve the ball after the signal of the referee’s whistle. When a player serves the ball before the referee’s signal, the referee will issue one warning per team and the team will be able to re-serve. If the incident occurs again, it will be an illegal serve and penalized with a side-out.

14. If the ball is tossed during a serve and the server does not hit the ball, the referee shall issue a reserve. Only one reserved ball per service turn. The Server will have an additional 8 seconds to serve the ball.

15. During the SERVE, the ball may touch the net while crossing it. (Let Serve)

16. When a player takes the play away from another teammate who is attempting to play the ball, it will be a JUDGEMENT CALL of unsportsmanlike conduct and penalized with a side-out or point.

17. Multiple contacts on the first ball across the net will be allowed. 18. Pressing the block is allowed.

20. Touching of the net is a violation and will be called no matter how or where the net is touched.

Appropriate Footwear: This has become a problem when using the school’s gymnasiums. Each player must have the appropriate footwear on to play Volleyball. Sandals, Flip Flops, Boots, socks, medical boot and bare feet are not appropriate footwear. The Athletic shoes that a player wears must also be a none marking shoe. The shoes that mark the floor are usually black. If the player wears a shoe and it is marking the floor that player will be asked to leave the court.

****If you must bring your children, you are responsible for them. If they are running around the facility, you will be asked to quit playing and supervise your children or remove your children from the facility. This must be enforced for the safety of the children and adults who are playing. ****

The serve cannot be blocked or attacked!

Contact below the waist is legal under USAV Rules.

Substitutions: Teams may only substitute in the following manner:
1. Rotation of players. (Must be done after the serving position)
-When substituting you must sub Male for Male or Female for Female.

Adjacent Courts: All adjacent courts are out of play before, during and after the play. (Sidelines extended)

It is our privilege to use the school gyms and other facilities. Let’s not blow it! Any person who vandalizes property, smokes, or drinks alcohol anywhere in the facilities will be punished by law. Treat the gyms and all the schools better than you would your own home. Please help keep the facilities clean.

Thank you for your cooperation and have a great season!